It is not mine, it is my mother’s fault I’m fat

Over eating goes back to primitive times.  Primeval man had no way to maintain or store fresh meat.  The storage of meat through the use of salting goes back centuries.  Salting removes the water content and turns meat into a storable form of, tasteless shoe leather.  The killing of livestock was timed around the eating and use of the animal.  Societies had feasting ceremonies where copious amounts of animal flesh were consumed over a period of days.  These aforementioned feasting ceremonies are what we call holidays.  Along with the gluttonous consumption of food came the overzealous drinking of alcoholic beverages.  How could one celebrate without a good “buzz” on?
Starting to see how overindulgence might be programmed into our DNA, as socially expected behavior.  When we were children and we were “good” what did our parents, or grandparents give us in reward?  Cookies or candies were given to us reinforcing our socially accepted “good” behavior.  When we were children if we were “bad” we wouldn’t get any desserts, for sweets only were for “good” children.  The reward system for impressionable young minds is intrinsically meshed into eating high sugar and high calorie treats.  Santa only brings good children stockings full of candy canes and ginger bread men.
Now that we know why we are so psychologically and possibly genetically scarred what do we do?  When someone has a substance abuse problem such as drugs or alcohol they are told to stay away from their object of addiction.  When someone has a problem with their relationship with food they are advised to indulge in their addictive behavior anywhere from three to five times a day.  The individuals with food addiction have to limit their amounts of intake to that which is considered reasonable.  This type of protocol would be wrought in failure in the dealings of other addictive substance behavior modification

Popular posts from this blog

June 28, 2018
In the pursuit of physical perfection, and the improvement of physical performance the use of supplements to amplify and cause changes is not a new concept.  The search for ergogenic aids, or supplements to improve the boy’s functioning or performance is as old as: the ancient Greeks consuming ground lions teeth or the native Americans consuming ground buffalo testicles.                                               The public’s conception of the means to change the body is not much better hundreds or thousand of years later.  The claims and marketing of today’s supplements make the concept of eating buffalo testicles seem logical.  Supplement companies are interested in making money not necessarily in helping, or furthering the health of their consumers.  Protein powder mixed with proprietary additives makes the claim that Mr Universe uses this formula to help achieve his massive chiseled body.  Mr Universe is obviously on a heaping helping of;  Steroids, HGH, Insulin and Sarms but
Read more

Where to start with Exercises

Reaching your Fitness Goals How to start an exercise program can be daunting task if one does not know where to start. To quote a line from the Wizard of Oz “it is best to start in the beginning”. To evaluate where one needs to go one must first honestly ascertain and evaluate that individual’s health and fitness level. This is definitely the time one may want to enlist the services of a competent personal trainer. A personal trainer will accurately gauge your fitness abilities through fitness testing or from observation of exercise performance. Using the fore mentioned methods of evaluation a fitness trainer can then select appropriate exercises, exercise order rest periods and other exercise prescription variables. The Fitness Performance blog article from November 8, 2012 “What is Fitness?” enumerates on the various components of fitness, this article can be used as a template for the lay person to evaluate their health and fitness needs. When first embarking on a health an
Read more

The sixth variable in weight training. 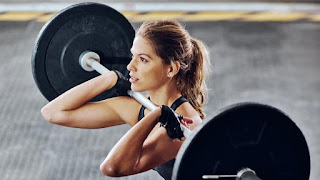 It has always been propounded that there are five variables that can be manipulated in weight training. The five variables of weight training has traditionally been, exercise chosen, order of exercises, weight loading, number of repetitions and sets of a given exercise and rest period between sets. I propose a sixth extremely important but neglected variable- muscle contractile speed. There has always been the consideration of contractile speed in relationship to maximum weight lifted. This is not the topic here. I am talking about a conscious slowing of the contraction to maximize effort and to minimize inertia. This type of "squeezing" has been used in bodybuilding to create "pump' or to maximize vascularity and promote the stretching of the muscle facia. This type of contraction will result in transient hypertrophy and not true myofibral hypertrophy. In essence a temporary increase in size but not an increase in strength. This type of training can reduce injuri
Read more